Past and present collide in Tallin, Estonia’s capital city. Stops here start with explorations of the old town, which is divided into two sections. The upper portion features Toompea Castle, the seat of the country’s power since the 13th century, along with a pair of churches: St. Alexander Nevsky Cathedral, with its onion-dome architecture, and the Cathedral of St. Mary the Virgin, boasting an interior decorated with coats of arms. The Kohtuotsa observation platform offers views of the district’s historic red-roofed buildings contrasted against the city’s modern skyline. In the lower section, cobblestone streets lead you to the main square, where you can visit Europe’s oldest continuously operating pharmacy; stare up at the 400-plus-foot spire of St. Olav church, once the tallest building in the world; and ascend the 115 steps to the belfry balcony of the Town Hall Tower. Tasting tours allow you to sample delicacies such as smoked elk and a variety of locally sourced spirits. 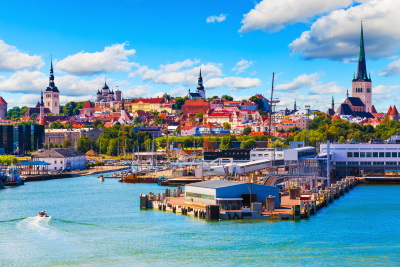