Greenwich, England, lies on the Thames River in southeast London. It is perhaps best known as the birthplace of Greenwich Mean Time. It was also home to the Palace of Placentia, birthplace of many of the royal Tudors, including Henry VIII and Elizabeth I. Although much of the palace fell into disrepair during the English Civil War, it was rebuilt in the 1750s—first as the Royal Naval Hospital and then the Royal Naval College. It is now owned by the Greenwich Association, and many rooms are open to the public. Other areas of interest are the National Maritime Museum; the Cutty Sark, a 19th-century clipper ship; Greenwich Park; and the Queen’s House, built for Queen Anne of Denmark. Greenwich is also home to a beautiful town center, filled with Georgian and Victorian architecture. It was in recognition of this architecture, and the town’s history, that Greenwich was named as a UNESCO World Heritage Site in 1997. 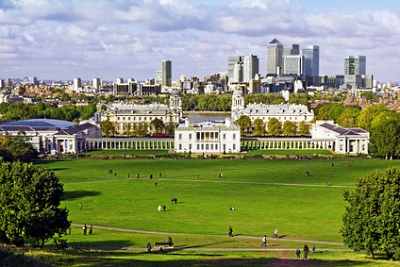 The Greenwich Pier is approximately 28 miles from Heathrow and Gatwick Airports.

Directions by Road - From the M25, look for Junction J2 and take the A2 exit. Greenwich is just off the A2. Look out for signposts.