Straddling the River Nid on the Trondheim Fjord, Trondheim is the third-largest city in Norway. Dating to 997, the city’s rich history is evident in sites like Nidaros Cathedral, built over the tomb of Norway’s patron saint, St. Olav. The world’s northernmost cathedral serves as the traditional coronation place for the monarchy and many Norwegians partake in a pilgrimage to St. Olav’s shrine. Trondheim offers a variety of museums like the Nidar Chocolate Museum, Archbishop’s Palace Museum and Rockheim, the national museum for popular music. Visitors can kayak or fish along the river or stroll past boutiques housed in wooden buildings in Bakklandet, the old quarter. The city’s reputable food scene boasts two Michelin-starred restaurants and plenty of farm-to-table eateries. Other attractions include a wooden royal residence, the 12th-century The Church of Our Lady and Munkholmen Island, a former Viking execution site, Benedictine monastery, prison and German fort during World War II. 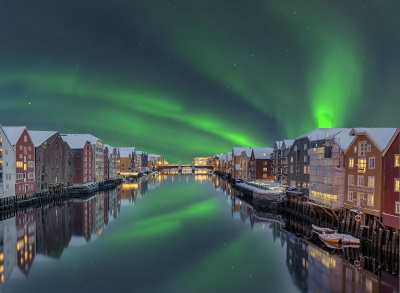