St. Anthony is a fishing village located at the most northerly tip of Newfoundland, close to L'Anse aux Meadows, the site of the first European settlement in the New World, approximately 500 years before Columbus' arrival. Other Norse groups had relocated from their homelands to the New World. In 1961, explorer and writer Helge Instad discovered a group of large mounds in the countryside. These mounds were excavated revealing the remains of a Norse settlement. This site became L'Anse aux Meadows National Historic Park in 1977 and is noted on the UNESCO World Heritage List of important cultural properties. The site at L'Anse aux Meadows has been completely excavated allowing visitors to see the remains of the homes, a smithy, and various worksheds. The park's interpretive center displays Norse artifacts from the excavation which include iron rivets, a flywheel and the floorboard of a boat. Researchers still debate as to whether the site at L'Anse aux Meadows is Leif Eriksson's 'Vinland,' a lush, beautiful area where he settled in for the winter around the year 1000. 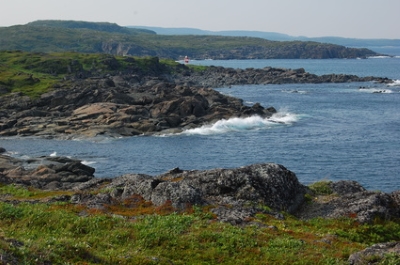