Prior to the discovery of oil in 1958, Abu Dhabi was basically a poor, rural wasteland. Abu Dhabi now has one of the highest per-capita incomes in the world. The emirate is characterized by three political or geographic divisions: Abu Dhabi City, Al Ain and the offshore islands. Abu Dhabi City, the seat of government of the UAE and the nation's largest city (pop. 243,000), is quite modern and clean. Date palms, nestled between the glass and steel high-rises, give the city a bit of soul, but it is still primarily an administrative center. Attractions include the Petroleum Exhibition, suqs, an old palace and many newer palaces owned by local sheiks. The corniche (a walled coastal road) runs about 8 mi/ 13 km - it's a lovely boulevard along the Arabian (Persian) Gulf. The city also has an attractive park with beautiful flower gardens and a 2,200 year-old tomb, known as the Round Structure. 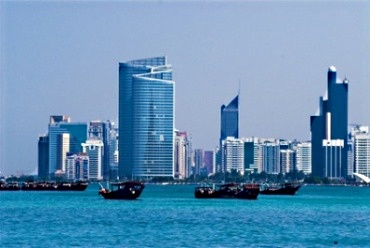